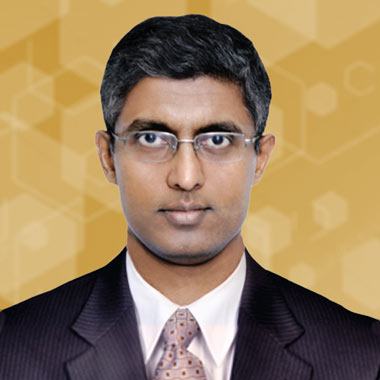 Kiran Mathew Thomas is a President at Reliance Industries Limited, and has been with the Reliance Group for the past 23 years.

He is presently the Chief Executive Officer of Jio Platforms Limited, India’s leading and most valuable technology and connectivity company.

Kiran joined the Reliance group in 1997 as Manager, Software Engineering, as part of the project team implementing Reliance’s Jamnagar refinery. He was a key member of the technology team that created the best-of-breed software systems stack that is used to run the critical operations of the refinery.

After the successful commissioning of the refinery in 1999, he took a 2 year sabbatical to pursue a full-time MBA degree at Stanford Business School, USA.

In 2001, he re-joined Reliance as a member of the initial launch team of Reliance Infocomm, the Reliance group’s first telecom venture. He started in the Chairman’s Office, initially focusing on strategy and planning, and subsequently, numerous projects and business functions, ranging from branding and marketing, human resources, customer care, billing, revenue assurance and customer lifetime value management.

He was one of the initial members of the core team that developed the business blueprint and project plan for Reliance Retail. In addition to being a senior member of the team ramping up the retail business, Kiran was responsible for creating key Strategic Partnerships with leading global retailers including M&S, Diesel, Timberland, Office Depot, Vision Express, Hamleys and numerous luxury brands.

Since Reliance’s purchase of 4G spectrum in 2010, he has been a key member of the core team responsible for Strategy, Planning, Project execution, launch and scale-up of Jio.

At Jio, he is responsible for Technology Innovation and the development of Jio’s next-generation software platforms. These include internet-scale systems that have handled more than a million sign-ups at Jio per day, tens of millions recharges and payments a day and network systems that handle over two million events per second.

Before joining Reliance, he worked with Tata Unisys Limited, a leading Indian IT consulting firm.

Kiran holds a Bachelor’s degree in Electronics Engineering from the Cochin University of Science and Technology, India, and holds an MBA from the Graduate School of Business, Stanford University, USA.

He is an avid basketball player, and has a lifelong passion for technology, especially in the areas of computing and software programming.